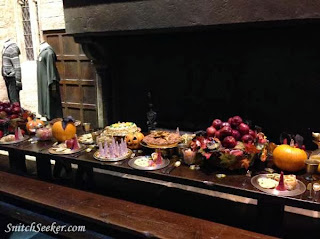 In Potter related news, Snitchseeker have been to the Warner Bros Studio Tour ahead of their Halloween celebrations and have previewed the decor and special events. The Halloween season started last Saturday and will run til November 3rd. Some previews are below:

"New additions [including] The Harp from Chamber of Secrets, which is rigged to play when someone operates the buttons, staff members demonstrate the two techniques they used in the films to create troll snot and also slime, the chance to make unicorn blood as seen in the films [and] the privilege of going beyond the barriers and stepping onto the potions classroom set, and we got to look at everything in close detail, ranging from the the hundreds of vials including those with shrunken heads, to the details in the potion making textbooks."

Isn't the harp from the Philosopher's Stone though? 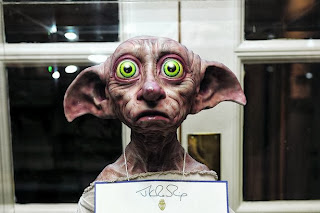 In other Potter news, J.K. Rowling has donated a very special gift to a local Aberdeen hotel. She stayed in the hotel (the Marcliffe at Pitfodels near Aberdeen) while comforting her ailing father-in-law recently and thanked them for their outstanding service with a Model of Dobby the Elf from the Potter films with a personalised letter. An image of the present is right, which will be moved to the Tivoli Theatre in Aberdeen when the hotel unfortunately closes in November.
Posted by Admin, Niamh, Danaholics Anonymous at 3:54 PM