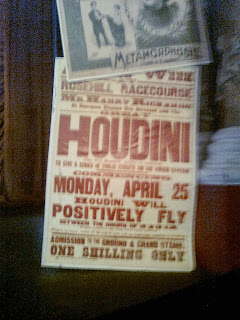 Is it a water tank? Is it a cage? The stage although simple, looks authentic and a bit cool. Classic posters of famous Houdini feats adorn the edges of the stage. A curtain covered square box sits in the centre. This may be a real Houdini stage. At interval there has been but three of similar simple sets (and lots of bangs and dry ice!) but this is all that is needed to set the scene.

The acting,devine costumes and the unfaulted accents take you to early 1900's america. Evanna Lynch embodies the graceful yet opinionated Bess and her natural soft-spoken voice accentuates the accent she is pulling off so flawlessly. The accent, which can often put off the meaning and power of acting, doesnt affect it too much and her withheld fear during the first death-defying act was believeable.
Nichols,who portrays Harry Houdini is believeably confident and spectacular, while his onstage brother Theo (played by Stuart Brennan) garners laughs and sympathy.

Between the two halves of the play, two stunts are performed and these and both stunning and breath-taking. But to some extent, they leave the audience hungry for more. In the second act, the Bafta award-winning Stuart Brennan (Theo Houdini) proves his award deserves and steals the show despite the other two leads' best efforts.  Evanna Lynch does however show more passion in the second act and despite the cheesyness of the ending makes us all cry just a little.
For those of you planning on going, if you want to be covered in smoke (not the choky type) and fake snow, sit near the front! 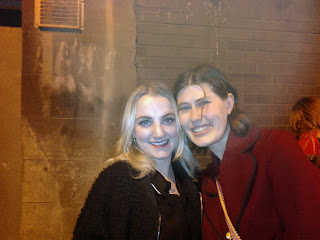 I met Evanna after the show and she was lovely, signing autographs and having a good hearthy chat with everyone.We chatted about bringing the show home to Ireland and how she was "more nervous" than she had been on any other date so far in the tour. She also said that G.B.F. was being released in the US and coming to a Limerick film festival soon and she would "tweet about that at some point".

Other thoughts I had during the play:
Houdini stage looks simple but cool! http://twitpic.com/dggbz2
Now that i see the space from the stage and I realise the tricks they'll be doing - kinda terrified!

While meeting Evanna I got a programme signed. I intended to try and get the one I was giving away signed as I have her autograph before (and I know lots of you guys don't get the chance to try and get her autograph and I wanted to give back to you my followers), now it has my name on it so it may not be so desireable - give your opinion in the comments.
Posted by Admin, Niamh, Danaholics Anonymous at 8:43 PM