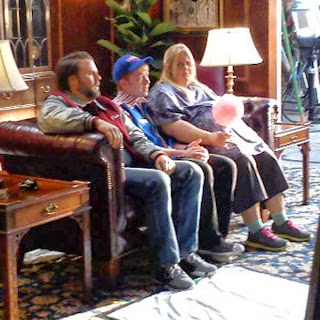 Great news Rupert Grint fans?! The pilot episode of SuperClyde is to air tomorrow night on CBS online! After much controversy over their previous rejection of the comedy show it seems it may be back onwards towards becoming a real show! The producer on the show had this vague statement on the future of the show:

I shot a single camera pilot recently called Super Clyde starring Rupert Grint that didn't get picked up, but I'm very happy to say that CBS is going to put it on the internet on October 9th -- both on CBS.com and a bunch of other places. I was really happy with the way it turned out, so I'm excited people are going to see it. The Millers is taking up a lot of my time right now, but I do have a few things in development that I'm supervising. They are all in the early stages.

Either way, getting to see the pilot is something!

Other shows actually starting tomorrow include Full Circle starring Tom Felton, which will air on subscription channel DirecTv. Tom Felton has been talking about the series, among other things with Bello Mag. The Tom Felton Obsession issue is now online here.
A video from the photoshoot is below:

Tom also spoke to Speakeasy about the show:

Felton stars as Tom, a 20-year-old British college student who is leaving Los Angeles, but before he does, he has one final dinner with Bridgette. During the meal, he attempts to convince her to leave her husband and elope with him.

How did you prepare for this role? It’s decidedly different than your film work.
Tom Felton: We shot this all on the day. Minka and I met each other two days before we shot to familiarize ourselves with the text. Physically speaking, we only had one dress rehearsal and in a weird way I think that helped. It was a situation that was never supposed to be the most comfortable of dinners. A lot of the stuff is physically about being in the moment.
And Tom, how did you get into his mindset?
It was hard to understand him at times. He went from being very understanding to rage and very bitter, there was definitely a sort of juvenile element and a mental state, He’s 20 and I’m 26. There was a lot more selfishness, a hidden selfishness that I got to explore. He’s a great bipolar spirit.

Read the full interview here. Tom also spoke to Fresno Bee and this interview can be read here.

In other Tom news, Tom has been to Dallas Comic-Con this past weekend and many pictures of him at the event can be seen here, here, here and Feltbeats have a full gallery of both days here.