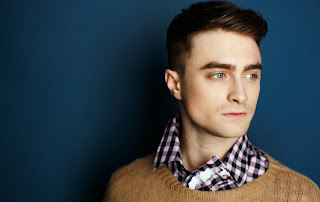 Daniel Radcliffe should be taking a break before beginning 'Frankenstein', but he's been busy promoting 'Kill Your Darlings'.

He also did a photoshoot for Flaunt,one picture from which you can see above and all will be in our galleries soon. Read the full interview here.

Dan appeared on shows such as Nikki and Sarah
US readers watch here and a clip below:

Milling About:
Audio here.
NPR:
Audio can be found here.

Further to this he wrote for the NY Daily News:


In “Kill Your Darlings,” I play poet Allen Ginsberg at the age of 17, when he’s heading off to Columbia University for the first time and he meets Lucien Carr (DeHaan), who he fell completely in love with. Carr is the one who introduced Allen to future literary giants William Burroughs and Jack Kerouac. The film is about him finding his voice, both creatively as a poet and sexually as well.

So far, people seem to be enjoying all those other films, even the slightly weird ones like “Horns” or more challenging like “Kill Your Darlings.” Everyone wants to think that Potter was a handcuff for my career in some way. But the franchise has given me amazing opportunities . It’s been a springboard rather than a hindrance.

And for the most part there are only superficial differences working on big-budget movies like “Harry Potter” and indies like “Kill Your Darlings.”

On “Harry Potter,” I grew up thinking it was normal to have expensive two crane cameras on set, every single day, just in case we needed one on standby. On “Kill Your Darlings,” we had the crane camera for just a single day.

The diaries Allen kept through his teenage years give a fantastic picture of this guy who was both incredibly ambitious and incredibly aware of his own intellectual genius. At one point in his diary he writes, “I know I’m a genius. I just don’t know what form that genius is going to take yet.” But on the flip side of that, he was quite shy and not very confident in terms of social interactions. And I found that interesting — to play these great literary figures before they became the great men we know.

Nailing Ginsberg’s accent was a huge thing for me. I enjoyed learning how to speak in a New Jersey accent. On set, I just did it all the time. I listened to a lot of Allen Ginsberg at various stages of his life and Jersey accents of varying degrees on the Internet. I didn’t want to go too far with this, because Allen didn’t have a terribly strong Jersey accent. When he was young, it was more neutral than the ones heard on “Jersey Shore.” I’d talk in the accent and read a lot of his poems and diaries out loud by myself and with my dialect coach.

He also spoke to Out Magazine about how he had "a great f**king time" playing a gay character. For more go to: http://bit.ly/18dPcCZ
They also posted a clip  here - http://bit.ly/1geVUyt
Also in KYD news, U.S. Theatres and dates have been announced here - http://t.co/8XXJGijuQ0 .


FINALLY, Dan did a promotional video for UK youth charity Get Connected. This you can see below:
Posted by Admin, Niamh, Danaholics Anonymous at 4:28 PM