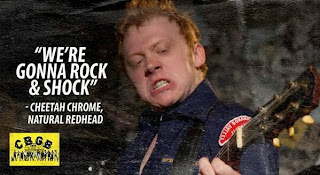 Finally got the chance to catch CBGB on demand and in a word it is fun! Rupert IS just a cameo, but a bigger cameo than most and he is very cheeky, cute and a bit clueless! I think it's the break away from Potter he needs, so lets hope it gets some interest in release once the big premieres happen. Speaking of, Rupert Grint.Net are attending the LA premiere soon so send in your questions for the cast (minus Rupert, who's in prep for Mojo) :

We'll be reporting from Friday's LA premiere for @CBGBtheMovie - tweet your questions to us for the cast & crew! #rupertgrint #cheetahchrome

Lost track of the review there, haha. But all else I have to say is that the comic book format of the film is original and interesting and that Alan Rickman is superb as the almost too laid back but awesome Hilly who set up CBGB as a country and blue-grass blues club thinking it was the next big thing but found the real new thing,rock music. Well worth a see.

In other CBGB news, a set report from filming can be read here thanks to the lovely peeps at RupertGrint.net.

A new clip is also available at EW, although it will only work if you live in the US.

In other Rupert news, he was out and about in London in between rehearsals for Mojo (keep an eye on RG.NET for a competition to win tix!) and some cute pics can be found at RG.US if that's your cup of tea.
Posted by Admin, Niamh, Danaholics Anonymous at 8:19 PM