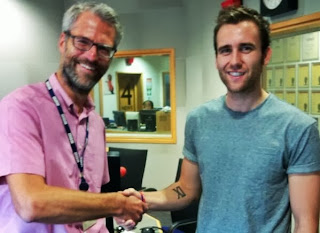 Matthew Lewis has been promoting his run in Bupa's Great North Run that's coming up (you can find out how to donate here) and appeared on BBC Leeds Drive 92.4FM on September 5th. We're still looking for that interview so hold tight, but there is an image left. He also took fan questions, as we reported on twitter,  a few days ago and a video can be seen below while the transcript can be found here once you donate or on the Leeds Rugby Twitter:

In other cast news, as we have reported, Evanna Lynch is to star in her first play, Houdini about the life and wife (played by Evanna) of famed magician Harry Houdini. The touring run officially started last night and prior to this she sat down for an interview with the Irish Times newspaper to talk about it. A snippit is below and the ful article can be read at the Irish Times:

When she reflects on it now, she can talk with some perspective about her life changing instantly. “I got a lot of independence,” she begins, mentioning how school became tutoring in England. “At 16 I was living by myself and getting up and going to work and all that, and doing school. So there was that juggling of normal life and adult life, like working in the real world.” Her friends didn’t change, her family didn’t either, but people were “more interested in me, I suppose . . . I think the biggest change was personally, I had to come out of myself.” She wasn’t too great at being herself. Interviews were a disaster, she’d just sit there, scared and answer “yes?” “I didn’t know how to ‘be’. It really scared me.”

The news comes from Magical Menagerie, however this link was also posted by my fb friend, her sister Emily.


Finally, in John Hurt news, He has spoken about franchises in line with his new role in Doctor Who and mentions Potter. Furthermore, he has narrated More Than Honey which is out in the UK now. Check here for listings.
Posted by Admin, Niamh, Danaholics Anonymous at 12:58 PM