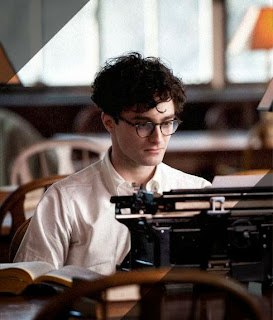 In Daniel Radcliffe news, an official website of his next film release Kill Your Darlings has been set up. The website, which does not host much new information or pictures did has one new promotional image which can be seen left.

In other Dan news, Leaky have been reporting rumours that he has been offered the lead in a new biopic of Queen singer Freddie Murcury.
DanRadcliffe.co.uk are now reporting that Dan has rubbished the claims:

"It's one of those very, very funny things: it came out of a story in the Daily Star and then you see newspapers like The Guardian using The Star as their source, and it grows and grows [until] it's 'Dan Radcliffe is playing Freddie Mercury!', which I was never going to do.

In all honesty, it WAS the Daily Mail and this leads me to re-think something I read in the Daily Star about him taking a break in October, which I think would be great since he's been working so hard!

In other Dan stuff, there has been a few more video interviews from Toronto which can be viewed below: