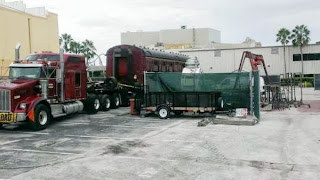 Snitchseeker are reporting that the first images of the upcoming Hogwarts Express, transport to the new Diagon Alley part of the Orlando The Wizarding World of Harry Potter theme park, have emerged online. Left is just one image of one of the cars from the train being transported.

There "is rumoured to be screens and electrical system that will display the "British countryside" from the windows of the train to guests that ride on it."
More as we get it!

The leading fansite is also reporting that the Japan theme park is set to hire some actors in the US UK and Australia. The auditions will take place this month and next and will consider people of both sexes for various roles including:

Beauxbatons dancers (which requires a history of ballet), male actors for Ollivanders and the Hogwarts Express conductor, and various female Hogwarts students who are prefects or part of the singing choir.

Information can be found for auditions by clicking on the applicable country: