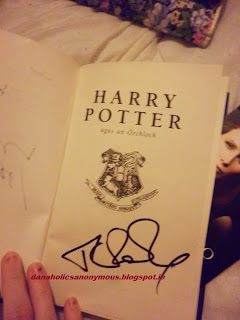 Late on Saturday night last, fans heard some fabulous news: JK Rowling had a new detective novel released under a different name Robert Galbraith!
But them the pandemonium began! Bookshops were out of stock, amazon's copies were selling like hotcakes!  It even made Amazon's number 1 seller spot.
The book entitled The Cuckoo's Calling is however still available at Book Depository, which considers it a pre-order, even though it was originally released in February 2013. It turns out Jo's experiment worked and it was received well even under a unknown name. Her response can be read here. There's even a sequel in the works:


"And to those who have asked for a sequel, Robert fully intends to keep writing the series" - J.K. Rowling

Did you unknowingly buy it before this was announced? Have you had trouble getting a copy?
We want to hear your story and reaction here! Just comment below!

In other JK news, Pottermore is to release the last of Prisoner of Azkaban by the end of summer and gain a 'navigator'. Here's what Leaky has said:


For those who know the stories inside out, you might want to jump straight to parts of the books that you love the most, whether you’ve explored the Moments leading up to them or not. The Story Navigator will allow you to skip ahead to any Moment available on Pottermore.com, giving you the freedom to explore them in any order you wish.

All Moments that you’ve yet to visit will appear to you in black and white, whereas all those you’ve already explored will be shown in full colour. There will also be some markers to show you where to find J.K. Rowling‘s new writing and other interesting things in the Moments.