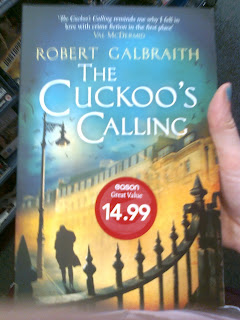 According to Leaky things have changed significantly in the fate of The Cuckoo's Calling since in was leaked, to Jo Rowling's annoyance, to be written by her (more on that later).
For example, sales having been at approx 8500 (including digi copies) before this reveal, according to Leaky, have jumped to over 200,000. Eason's, a multi-branch book store in Ireland have it at number 5 on their bestsellers list, mere weeks after the announcement. Mugglenet are also reporting that a "signed first edition of 'The Cuckoo's Calling' sold for 2,950 GBP" recently. A new US edition with Rowling's name included is already said to be set at 300,000 copies, according to Snitchseeker.

But back to how the big reveal happened. According to Leaky Cauldron it was a leak:

London legal firm Russells stated on Thursday that Chris Gossage, a partner at the firm, had informed his wife's close friend Judith Callegari about who Robert Galbraith really was. Callegari subsequently posted a Tweet on the subject, although her account has now been deleted. In a statement to Rowling, Russells apologised. Rowling and her agent were immediately informed once the firm learned what had happened, with Russells confirming that the leak was not part of a publicity plan by Rowling.

However, Joanne is keen to keep up the pseudonym and has set up a website and twitter in Robert Galbraith's name (@_RGalbraith). I can't imagine this twitter will be any more active that the last, however as there is a second Strike (lead character's surname for those who aren't reading the book yet) book written, to be published next year, perhaps it will be more updated. Either way, the website can be accessed here and already has a lovely FAQ section.
Source:  Leaky Cauldron
Posted by Admin, Niamh, Danaholics Anonymous at 9:27 PM