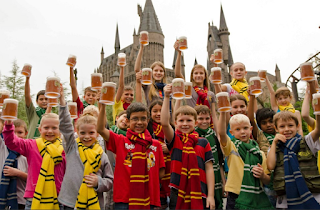 While the Wizarding World Theme Park celebrates 5 million butterbeers, another theme park feature is in the works.
Rumours are circulating this week that the Potter cast are to be reunited on a 9th Harry Potter film; a mini-movie for the theme park! Currently Rupert Grint is the only one confirmed to do the clip, but this is exciting news! Mugglenet, who have been speculating, reported:


"Today, representatives of Rupert Grint confirmed to Snitchseeker, that he is also [as well as Helena Bonham Carter] involved in the filming of these scenes. The question that still remains is which ride, or even which park, this mini-movie will be used at?"

In other exciting Potter related news, Tea leaves are becoming clearer to read here, check it out!
This all means that Prisoner of Azkaban will soon be available on Pottermore. Right now you can choose which moment will be previewed on the Pottermore Insider right here.