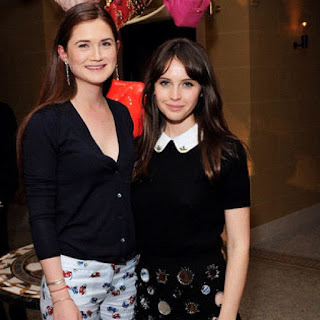 There is a lot going on with Cast as usual so here's a quick roundup;

Bonnie Wright last night participated in a live-streamed chat with Felicity Jones as part of a screening of her short film Separate We Go. Left is an image the actress put on her Instgram of her and Felicity.
You can read here.

UPDATE:
Here are some quotes while clips from the interview can be watched at Miu Miu:
the–miumiu–london is a very collaborative event, as is film. What have you learned through collaborating?
Bonnie Wright: My film came from my degree. You’re thrown into a degree with 60 other people and who you work with comes from that pool of people. The choice of who you want to work with is put aside, which can bring out different angles in you, ways you have never thought of yourself. Each year 12 graduation films are made.

You have to pitch your idea in your second year. I might have graduated in something different to writing and directing if I had not been chosen. Once you are chosen you have to pitch to the rest of those in your degree. I ended up working with people I had never worked with previously. Throwing yourself into this new mix of people and seeing what comes from that was incredibly interesting. And though we are trying to mimic the industry, you are also equally doing your degree, which is quite nice and brings down the directorial sense that “It’s my show, guys.”

It was hard to gain that balance in collaboration because it was about degrees being equally marked. But at the same time if someone didn’t stand up and be the director the film would not have been made. Starting in acting and going to directing informs the work. It’s the same language, which has helped me massively. Where other classmates were concerned about communicating what they wanted, that was the thing I felt was my strength, where the tech elements were more my weakness. All the directors who came out of my degree are totally different: some more technically led, some did not write their piece. Being thrown into the group was the most interesting thing. My film would not be the same if it were not for those collaborators, such as costume, set design and others.

How much thought goes into what you’re wearing in your own creative work as a director or costumes as actresses?
Bonnie Wright: So much. Even if it is not a costume, it matters so much if you want a character to feel or stand a certain way. When you see people walking in the street, you can judge, for example, if someone is dressed quite scruffily, you approach them or speak to them or create a whole life around them so differently. It’s interesting when you speak to actors in the costume process. For some people it’s incredibly important. You hear stories that some people want a pocket here or a pocket there to feel a certain way.

How does being a woman influence your work and your production?
Bonnie Wright: The main person I’ve collaborated with is a man. Creating what we create and the ideas that we come up with wouldn’t be the same if we were both women. I can be in touch with the masculine side and he can be in touch with the feminine side. When I was younger I was such a tomboy, and so often I still feel that side to me. It’s also the armor, putting on that gear when you are on set to be more masculine. But I do not feel that most of my generation would want to be a feminist because of the sort of death of that word.

How would you describe the spirit of London today?
Bonnie Wright: People spend a lot more time together when you take away that extravagant way of life and spending. But the friendship between people and your own home can be really important. It’s when you sit like now and take time to reflect. But hopefully it will continue to be vibrant.

And English film?
Bonnie Wright: Amazing TV as well. I guess technology does change how you watch things as well. The attention span of people has faded so massively. People want to watch quick things and if they haven’t grasped it in the first three minutes they won’t carry on, so even getting someone to watch a short film is difficult.

James and Oliver Phelps are to take part in The William Hill Foundation Cup as part of Project Africa. It is a football match player by two celebrity teams on 9th December in aid of Africa.
Tickets can be purchased for the event in Northampton Town FC here.

Michael Gambon finished up a successful run of All That Fall on November 25th according to Mugglenet. Read more over on their website.

Some of the recent 'young' Potter stars Ellie Darcey-Alden and Ryan Turner, who portrayed Young Lily Evans and Hugo Weasley in Deathly Hallows will be turning on the Christmas lights this Friday at 7:00PM at the annual Christmas Festival in Leighton Buzzard, UK.
Posted by Admin, Niamh, Danaholics Anonymous at 4:13 PM