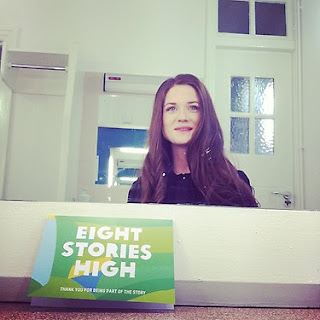 Bonnie Wright has been tweeting that she is to do a reading at Oxfam's 70th Anniversary celebrations. She is in Oxford currently waiting for the event in the Oxford Playhouse. Oxfam have posted the details of the event which is 50 pound and occurs at 7pm tonight. There are tickets remaining which can be bought here. You can also watch along FOR FREE at this page.

UPDATE:
The video is now streaming live and can be watched from the begining if you so wish, below:
Also an image of the actress doing a live Q&A can be viewed here. 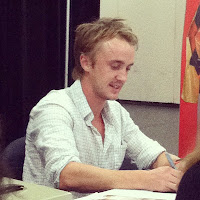 Tom Felton is also out and about, attending the Comic-Con in New York and participating in a panel right now. Some images from Feltbeats are available in the gallery, but one is right.

When we post a bit ago, Tom was still at a panel discussion at the comic-con and since then Snitchseeker posted some tidbits of what Tom spoke about. A few of these can be seen below:

If @TomFelton was given the right to change Draco's choice to not fight in Deathly Hallows, he joked he'd go half-way in & cause carnage.
@TomFelton said he saw @Mattdavelewis a few days back in London while Matt did @OurBoysThePlay & reminisced about their Harry Potter days.
@TomFelton joked that he was eager for his wedding to Dan Radcliffe when asked by a fan at #NYCC , and that Dan 'would wear the dress'.