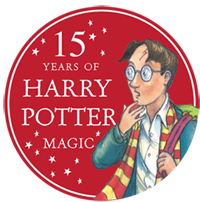 We reported previously that Bloomsbury were holding a competition to find the biggest UK and Ireland Potter fan to celebrate the 15th anniversary of the release of Harry Potter and the Philosopher's Stone.

The of Head of Children's Publicity at Bloomsbury, Ian Lamb has sent out this lovely email to entrants: We just wanted to say a huge THANK YOU for taking part in the Harry Potter and the Philosopher’s Stone 15th anniversary competition. It was amazing to see the passion and love that people have for the HARRY POTTER novels, and it was a joy to read through all the entries.


He also announced that the winner and 14 runners up have been announced. The winner, Alissa Howard, a 17-year-old from Somerset, won a trip for her family to Orlando to the Wizarding World Theme Park along with a special "leather-bound and numbered 15th Anniversary Edition of Harry Potter and the Philosopher’s Stone, signed and dedicated by J.K. Rowling" which the 14 runner-ups also won.
I admit I'm very jealous,especially since the library I entered in took away the version of my entry I spent ages on and made me fill out a simple form. The winning entries can be viewed in full here.

The final note on the email reminded us off the live webcast JK will be doing this thursday,which can be read about here.
Posted by Admin, Niamh, Danaholics Anonymous at 7:54 PM