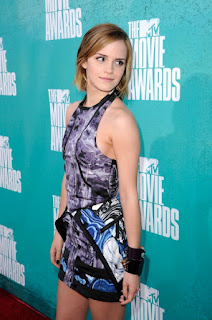 Snitchseeker,Mugglenet and Leaky Cauldron were tweeting away last night about the progress of the MTV Movie Awards last night and the categories Harry Potter and it's cast were nominated in. At Danaholics we like to focus on the wins not the losses, so here's how Potter faired:
Harry Potter won Best Cast and Best Hero!

Emma Watson was in attendance with her Perks of Being A Wallflower co-stars and a picture of her arriving,courtesy of Snitchseeker, can be found above.
Snitchseeker were also first to post the trailer Em and co presented at the event, which can now be seen below courtesy of MTV.

If you are outside the US, Mugglenet have posted the international video,which is below, but you can also catch the cermony and that trailer on MTV tonight at 9pm GMT.

UPDATED:
Snitchseeker and Mugglenet have posted the video from MTV of Emma accepting the BEST CAST AWARD. UNfortunately,it only plays if you live in the US:

Harry won best Hero by a margin of a massive 70,000 votes!!! Well done Jo for creating a fantastic character.
Niamh
Admin of DA