Dan Radcliffe Out and About in America: Gore Vidal's 'The Best Man' and 98th White House Correspondants Assoiciation Dinner 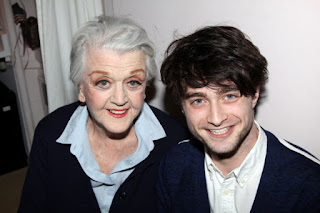 Now that Kill Your Darlings has wrapped, Dan is probably getting anxious about complacency being the big workaholic he is. However, he has kept in the public eye, attending a Broadway show and hanging out with George Clooney and the President of America Barack Obama (if oyu don't mind!) in Washington DC.
Snitchseeker are reporting that Dan was pictured backstage (left) with Angela Labsbury at Gore Vidal's The Best Man on braodway recently. 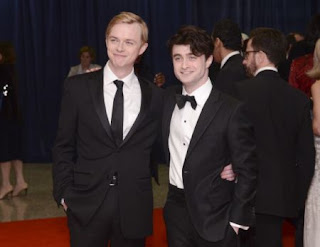 He was also in Washington DC, as DR.CO.UK are reporting that he was an atendee at this year's Annual White House Correspondants' Association dinner. It was a black-tie affair he attended with his KYD co-star Dane DeHaan but also had guests such as George Clooney. A picture of the pair can be seen right.
Posted by Admin, Niamh, Danaholics Anonymous at 3:24 PM