What if Potter Was Remade? First 'Kill Your Darlings' Dan interview

RUPERT GRINT . NET alerted us to an interesting Digital Spy article about the possibility of a remake of Harry Potter and it includes testimonials from cast members such as Tom Felton, Evanna Lynch and Nat Tena (Tonks) about what they'd think about a remake. Check the video out below; 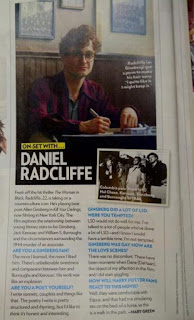 In other AFTER 'this' HARRY news, our own Harry Daniel Radcliffe is currently filming Kill Your Darlings in NYC as we previously told you, and the first OFFICIAL promo and interview has been released by People Magazine .
Snitchseeker posted the transcript (which is now below) and a blurry scan which can be seen left.

On set with Daniel Radcliffe;

Fresh of the hit thriller The Woman in Black, Radcliffe, 22, is taking on a counterculture icon. He’s playing beat poet Allen Ginsberg in Kill Your Darlings, now filming in New York City. The film explores the relationship between young literary starts-to-be Ginsberg, Jack Kerouac and William S. Burroughs and the circumstances surrounding the 1944 murder of an associate.

Are you a Ginsberg fan?
Daniel Radcliffe: The more I learned, the more I liked him. There’s unbelievable sweetness and compassion between him and Burroughs and Kerouac. His work was like an explosion.

Are you a poet yourself?
Daniel Radcliffe: I write sonnets, couplets and things like that. The poetry I write is pretty structured and rhyming, but I’d like to think it’s honest and interesting.

Ginsberg did a lot of LSD. Were you tempted?
Daniel Radcliffe: LSD would not do well for me. I’ve talked to a lot of people who’ve done a lot of LSD – and I know I would have a terrible time. I’m not tempted.

Ginsberg was gay. How are the love scenes?
Daniel Radcliffe: There was no discomfort. There have been moments when Dane [DeHaan], the object of my affection in the film, and I did start giggling.

How will Harry Potter fans react to this movie?
Daniel Radcliffe: Well, they were comfortable with Equus, and that had me simulating sex on the back of a horse, so this is a walk in the park.

Harry Potter fans are happy. I can't wait to watch Kill Your Darlings!!