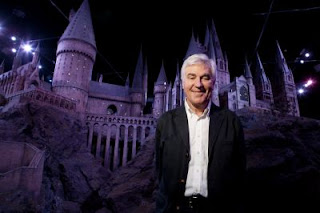 Lots of NEW NEW NEW today! It's all so exciting! March is set to be a great month with the wb studio tour opening at the end (we will be covering it and the red carpet event) and Into the White (possibly) coming out worldwide...still no details on UK release dates.
Anywho;
Magical Menagerie are reporting today that a new image from the Warner Bros Studio Tour in Leavesden London has been released, this time of the awesome 1:24 scale model of Hogwarts featured on the tour.
This can be seen left and on our twitpic. The picture shows you just how massive it is in relation to people! More images can be found here.
Mugglenet have added a video to the news, which can be seen below;


In other new videos, RUPERTGRINTUS released a new Into the White clip, which can be seen below;


UPDATE
SNITCHSEEKER have posted a massive 40+ images from the Leavesden Studio Hogwarts model! Check them out here!
I will post tem on the facebook asap.
Posted by Admin, Niamh, Danaholics Anonymous at 4:09 PM