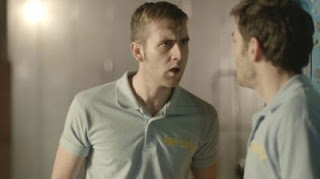 A fair bit of stuff regarding Matthew Lewis and his projects The Syndicate and Wasteland has emerged the last week or so.
Matt attended a press screening of the BBC show the Syndicate a few days ago and it will air next Tuesday on BBC1 at 9pm. The ever updated MatthewLewisCom have some new promos from the show and an interview with Matt. One picture of Matt is left,the rest can be viewed here and the interview can be read here.

As regards Wasteland, there is now a twitter and a facebook which you can follow and like here and here. The twitter is very chock-a-block with Iwan Rheon film release Wild Bill stuff at the mo, but I will keep you updated as Matt and Wasteland stuff comes up, including this giveaway on Facebook to be an extra in the film. The filming is currently underway in Leeds and also stars Potter Alumni Timothy Spall, aka Wormtail. There was also tweets regarding stuntwork-"It's a big stunts day today on @wastelandmovie - Fights and flames aplenty." Be careful, boys!" and the Director of the film Rowan Athale.

More details of Tom Felton’s Labyrinth have emerged.
On the trailer front, a second version of trailer was uploaded then taken off youtube.
Snitchseeker have revealed the following information in the mini-series;

"Got official word from Tandem Comm.: @TomFelton & John Hurt's miniseries 'Labyrinth' will be 2 parts, 90 minutes each, out 3rd quarter 2012."