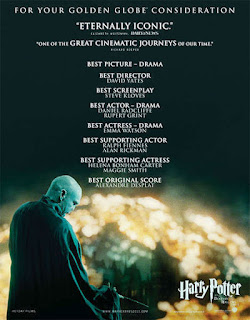 Despite being out of cinemas for months ( except in Britain where its returning) Deathly Hallows Part 2 is still stirring up Award Fever!
The film won at the Costume Guild Awards and is nominated for the 2012's Nick Kids Choice Awards!

Snitchseeker reported that HP won excellence in Fantasy at the Costume Guild Awards and also posted regarding 4 nods Potter has received at the Nick Kids Choice, Favourite Book Series, Favourite Movie, Favourite Actor for Dan and Favourite actress for Emma. Rupert is once again ignored unfortunately!

Continuing on the award front, Stuart Craig, set designer on the Potter films who has been nominated for an Oscar, has been profiled by Vanity Fair. Check it out here.
Leaky posted the story.

Mugglenet were first to report on a sitdown with Visual Special Effects artist Tim Burke, but unfortunately they are down atm, so i'm taking the link from MM. Check out the interview here.
Posted by Admin, Niamh, Danaholics Anonymous at 6:11 PM