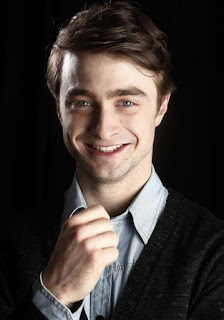 I knew The Woman in Black promo would get hectic after Dan finished How to Succeed, but PHEW EW! As we posted on twitter just as soon as we could (despite hearing about it like 5 hours earlier) The London and World Premiere will be held 24th January in the Royal Festival Hall (currently researching that) and the Canadian Premiere is to be held in Toronto on the 26th..still waiting for details on that!
But now there is a new brief trailer and BRAND NEW featurette including onset interview with the main man. There is a new photoshoot from Associated Press,one picture from which is left, the rest here. Also there is a new interview with the screenwriter of the chiller about Dan where she continually compliments him on his ability to "throw himself into" the role , how everyone involved was "blown away by his performance" etc which can be read at MTV here. Don't worry if its asking you whether you want the uk or us site just keep refreshing til it doesnt bother you!
Next Snitchseeker posted this new trailer,yet this was posted by Teen.com previously and retweeted by the twitter for The Woman in Black, but I hadnt got to it yet. Check it out below;


There is also another featurette available now, as reported by Snitchseeker. This can now be seen below no the wonderful DR.CO.UK 's youtube.