The Major The Woman in Black World Premiere rundown-soon to include exclusive Dan pics! 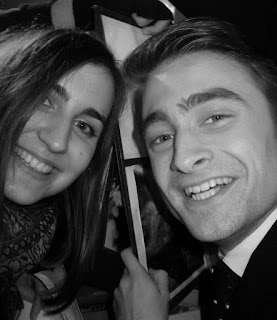 Where to begin...
There were literally dozens of tweets,pics,videos,interviews reagrding this premiere over the day it happened and the following days,so bear with me as i attempt to give you the highlights-it is what we're about here at Danaholics afterall!
First I'd like to draw your attention to the picture left of my wonderful longtime Dan fan Kellie with Dan at the premiere-lucky girl! I will post some of her pics from the premiere at the begining of our new Album The Woman in Black London and Toronto premieres.
Firstmost to mention would be the pictures taken on the night by The Woman in Black UK, MSNENTS and other groups I was following. I will put a selection in the album above. I note of course that a million pictures of Dan in the same outfit will get monotonous for even the biggest fan, so I will mix and match with other members from the cast and only pick the nicest ones of Dan.
Moving swiftly onward, I will now post a few videos from various sources just as soon as I get hold of them from the pandemoneum that is my twitter!
Stay Tuned!
First of our videos;


first of the reviews here.

Apparantly there ar interviews here, but my browser fails me!

dr.com has more pictures here. The Woman in Black UK has a great selection here , on top of the ones in our album.