Deathly Hallows Part 2 wins at Peoples Choice, wins special AFI and National Board of Review awards, nod for Blockbuster of the Year 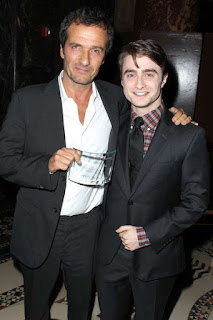 Mugglenet had been reporting on the People's Choice awards had they happened, but Snitchseeker posted the results;
Deathly Hallows Part 2 has won:
*Favourite Movie
*Favourite Action Movie
*Favourite Ensemble Cast and
*Favourite Book Adaption
Despite being nominated for 4 out of 5 Star Under 25 nominees, Tom Felton, Emma Watson,Rupert Grint and Daniel Radcliffe lost out to the fabulous Chloe Mortenz. Yet never fear Feltonfamily and Rupert Fans, we got them included so GO US!

In other awards news, Daniel accompanied David Heyman to the National Board of Reviews Awards to collect a special award, the Special Achievement in Filmmaking award at the 2012 National Board of Review gala. Snitchseeker posted a picture of the pair (top left) which can also be seen on facebook.
Snitchseeker also reported that our old favourite Christopher Columbus picked up another special award for Harry Potter at the AFI. This was incredibly honourous for the film series as the American Film Institute usually only awards films made by in America. Check out the lovely man below. 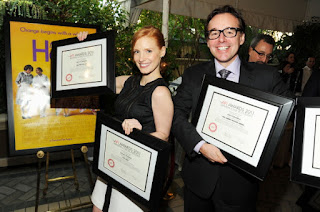 FINALLY, you can vote for Deathly Hallows Part 2 as your BLOCKBUSTER OF THE YEAR right now!!! Mugglenet are reporting that The London Evening Standard is leaving it open to us to vote it in! So head over now and vote here.
Posted by Admin, Niamh, Danaholics Anonymous at 5:27 PM