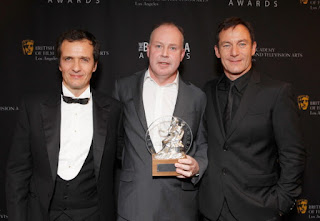 As Snitchseeker posted this afternoon, Helena Bonham-Carter was awarded "the Britannia Award for British Artist of the Year" and David Yates,director of the last 4 Potters, received "the John Schlesinger Britannia Award for Excellence in Directing" at this year's Bafta Britannia awards. Pictures will be in our Random HP album soon.
Both were joined by David Heyman in LA to talk about Potter at a special screening. Quotes etc can be read on Snitchseeker article. photos of this will also be in the Random album.

Magical Menagerie posted this link to a sugarscape video of Tom talking about getting teary on the way home from the final day of filming!
Watch it here.

Finally, the location for the new Harry Potter theme park has been confirmed as Los Angeles and more details will follow shortly according to magical menagerie!
As always,Keep you posted!
Posted by Admin, Niamh, Danaholics Anonymous at 10:26 PM