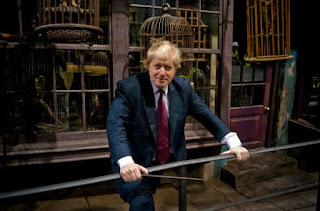 The hp studio tour, ie when Leavesden Studios, home of the Harry Potter series and the cast most of the time, opens on March 31st, we'll be there in earnest to cover it..however there's one thing i wasnt sure of...what sets will be open?
WBSTUDIOTOUR just revealed that one such set will be DIAGON ALLEY!! they even sent out a picture of the Mayor of London having a look,which you can see left!!

Snitchseeker have just updated their coverage of this story with a video;

In other exciting news, DR.CO.UK updated with the news that Daniel Radcliffe will host the acclaimed show Saturday Night Live on January 14th next year!
DR.COM also announced new scans for an Empire issue with The WOman in Black! Have you all submitted your stories? The scans are in our album.
They also linked us to some new photos, which can be now found in our Dan-Dan-Dan album!
Posted by Admin, Niamh, Danaholics Anonymous at 8:03 PM