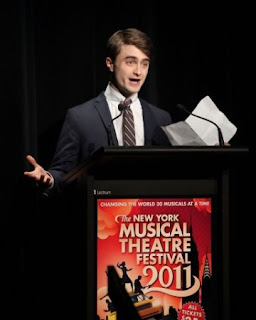 "Daniel Radcliffe attended the New York Musical Theatre Festival 8th season awards in New York on Sunday evening, where he presented the NYMF 2011 Awards for Excellence to the producers of How to Succeed in Business Without Really Trying, Neil Meron and Craig Zadan."

A picture of him at the event can be seen left, the rest will be on our facebook.

Snitchseeker were the first to post 3 new deathly hallows behind-the-scenes videos, which can now be seen below;
GOBLINS