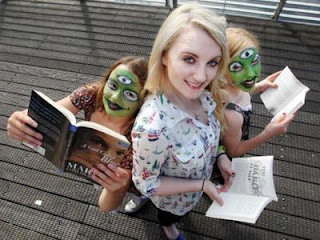 Harry Potter actress Evanna Lynch launched this years MS Readathon in Dublin recently, a campaign which both encourages literacy and raises vital funds for the irish Multiple Sclerosis society. MS is a treatable disease nowadays only due to such a charity,whereas just 20 years ago it claimed lives including that of JK Rowling's mum Anne.
Irish showbiz queens of the show xposé,which aires on tv3 here in Ireland, were on the scene to interview to gorgeous co Louth native who recently admitted battling anorexia.
I posted quotes as it aired live today on twitter,these can shortly be viewed below along with the video the site just posted.


DanaholicsAnony DanaholicsAnonymous
evanna thinks 'we will stay in touch' as regards the cast after Potter,has no qualms bout boys,has 'plenty of friends' is 'never lonely'
3 hours ago

UPDATE: CLICK ON THE LINK EMBEDED IN THE TITLE (IE JUST CLICK THE TITLE OF THIS ARTICLE) TO BE BROUGHT STARAIGHT TO THE VIDEO WHILE I'M WORKING A WAY TO DOWNLOAD THE VIDEO!
Posted by Admin, Niamh, Danaholics Anonymous at 9:28 PM