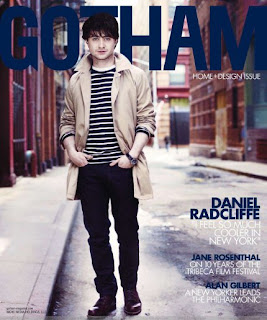 Have I got a scoop or is this old news?
I came across a Portugese website with a story regarding Dan's appearance on the cover of a magazine called 'Gotham', appearing as the cover star for April.Here's the google translation:

In an interview for the magazine, the actor talked about working in New York. "There's something very special about being British in this city because people have a fascination with British culture. I do not know what it is, but I feel much better here than in England, "he said.

He also vented about the challenge of starring in a musical. He is on the stages of Broadway with the musical How To succed in Business . "I have no doubt that this will be the hardest job of my entire career. I have tested a lot, because I do not want my director has to be criticized for my sake. "

The cover can be found left, with some photos coming up on twitpic.
TURNS OUT I WAS WRONG BOUT THE PORTUGESE...The website was portugese,but the magazine was New York. Thanks five million billion to @Starongra FOR CORRECTING ME!
I am a troll sometimes after 7 or 8 in the evening. Being a trainee librarian os a brain drain.
Posted by Admin, Niamh, Danaholics Anonymous at 9:57 PM