DA EXCLUSIVE: BONNIE WRIGHT TALKS GROWING UP ON SET,BEING A 'SILENT WARRIOR' AND HER ACTING FUTURE TO RTE! 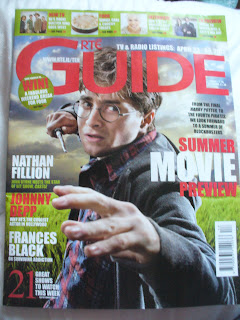 THE LATEST RTE GUIDE (IRISH TV GUIDE) HAS A SUMMER MOVIE PREVIEW,WHICH OF COURSE INCLUDES HARRY POTTER AND THE DEATHLY HALLOWS PART 2.
Included in the segement is a relatively new promo of Harry (pictured left in the outfit he is wearing in part 1 when dancing with Hermione) and an interview with Ginny Weasle actress, Bonnie Wright. 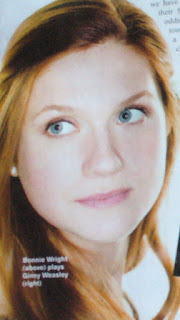 She discusses growing up on set:

"It's bizzare. When you're filming and in the mix of it all,you become quite absorbed in the set and what you have to
do that day. With it coming to an end, you now have that moment when you reflect on everything,and it has felt like such a big journey."

Discussing her character Ginny and her role in Part 2, she refers her, Neville and Luna as "silent heroes";

"They have been continuing that Dumbledore's Army feeling back at Hogwarts,so when Harry, Ron and Hermione return for the finale, they see we have been still battling on their behalf against the odds...I enjoyed being a silent warrior!"

She also looks to the future:

"Be it Movies, TV or Theatre, actinmg is definitely my pathway, so I guess it's just a case of finding the next job!"