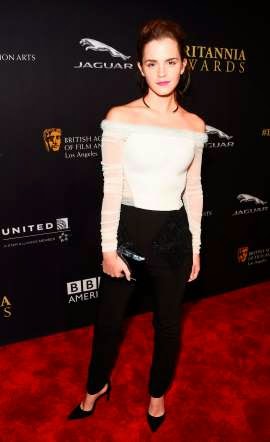 We recently posted the first look at Emma in upcoming film Colonia and we now have some quotes from the actress from the Luxenbourg Wort speaking about the role. Check them out below:

The film follows the story of Lena and Daniel, a young couple involved in the political uprising in Chile in the 1970s. When Daniel goes missing, Lena sets out to find him, even when it means going undercover to join a cult at Colonia Dignidad. It’s there that she encounters Paul Schäfer, the abusive cult leader. This is one of Watson’s first serious leading roles in a film for adults, and she spoke a little about what drew her to the film.


I think [Colonia is] about how far you’re willing to go for someone you love. The pressures and tensions of real life, how they act upon a relationship. For me, it’s really about a very courageous woman. The narrative structure we’re used to seeing is the damsel in distress rescued by a knight in shining armor. But this is a story where a young woman goes to save her man. That immediately appealed because you get to be proactive, you get to play a character who really steers the storyline and guides the pace of the story instead of being reactionary and passive. It presented me with a really exciting opportunity and one which is unusual.

Given that we know Emma is committed to issues of gender equality, it’s unsurprising that she would be drawn to those aspects of the role of Lena. Still, Watson acknowledged that it was tough taking on such a difficult topic.


I was slightly reluctant to read the script because of the subject matter. I thought it was going to be heavy. [...] I often have to play music in the car journey on the way home [from the set], go for a walk or a run, because you carry an energy with you, and if you’re not careful it starts to seep into other parts of your life, and you have to find a way to draw a line and cut off where your life starts and work ends.

Still, Watson has found that working on Colonia is something she relishes.


The script was fast-paced. I couldn’t put it down. I read it in one sitting. It’s a thriller. I think Florian [the director] has managed to balance really well darkness, lightness, heaviness and pace. [...] The truth is I’m happy to do my job for free…It’s about something that challenges me and makes me a better actress and more than that that pushes me on as a person. I was terrified to go to Chile and go to the colony. I found it difficult to absorb some of the things I was reading in the script. There’s something about that – I wanted to be challenged.

Emma Watson recently attended and was honoured at The Britannica awards. An image of her at the event is above left and her speech is now below. 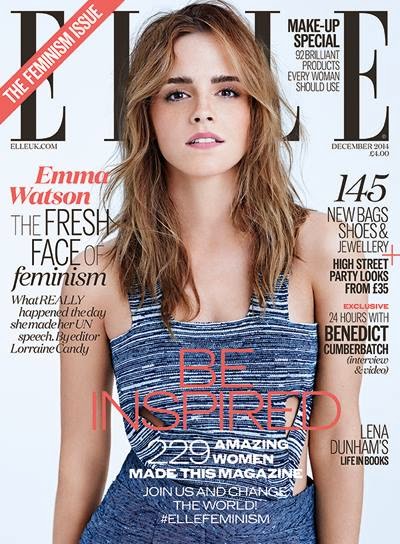 In other publications, Emma spoke to ELLE (cover image left) and is it's Feminist issue cover star recently. Among other things she spoke about Womens Rights:

Her decision to become an activist on behalf of women was, in many ways, prompted by her fame as an actress. "Fame is not something I have always felt comfortable with; I have really grappled with it emotionally. And, in a funny way, doing this is my way of making sense of the fame, of using it. I have found a way to channel it towards something else, which makes it so much more manageable for me. And this is something I really believe in," she says. She also feels passionately that feminism can and should mean different things to all people, but that all people should embrace it. "Feminism is not here to dictate to you. It’s not prescriptive, it’s not dogmatic. All we are here to do is give you a choice. If you want to run for President, you can. If you don’t, that’s wonderful, too." It's an attitude she learned as a young girl. "I’m lucky I was raised to believe that my opinion at the dinner table was valuable. My mum and I spoke as loudly as my brothers."

A behind-the-scenes video of the shoot is now below:


The issue is now on newsstands and more images are in our gallery.
Posted by Admin, Niamh, Danaholics Anonymous at 7:26 PM