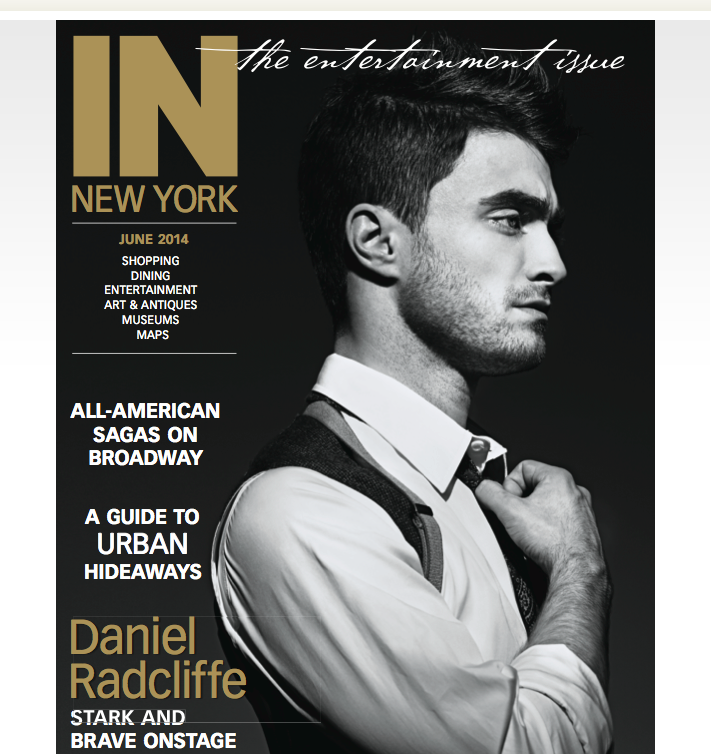 There's still time to vote for Daniel Radcliffe and The Cripple of Inishmaan at the Broadway.com Audience Awards! Show your support here.

In other The Cripple of Inishmaan news, I was not aware but the Inishmaan Aunties Twitter has been posting behind the scenes images from the show and these will now join the Inishmaan on Broadway gallery.

Dan will grace the cover of June's In New York Magazine (left) so watch out for that.

In other interview news, Dan tackled diagon alley escape from Gringotts questions (AGAIN, I probably hate those more than he does) and wedding rumours with the Daily Beast...

“No! Absolute bollocks. Absolute bollocks,” says Radcliffe, adding, “I don’t think we can even give the Daily Mail credit for that one. It was Star, I believe. It was funny. I got a text from my English teacher saying, ‘Is it true? Congratulations!’ and I had to text her back, ‘I’m afraid not! We’re very happy, but we’re not getting married.’ Marriage is not a thought that is even remotely close to me at the moment.”

Radcliffe also says he’s “totally not involved” in J.K. Rowling’s Potter spin-off,Fantastic Beasts and Where to Find Them, which will hit theaters in November 2016, and the trio of Watson, Grint, and himself haven’t hung out together in quite some time.

“The last person I saw from Potter was Rupert, actually, and I saw him a couple of months ago at a theater awards thing in London,” says Radcliffe. “I also saw him in this play in London he did, Mojo, and he was brilliant in it. It’s a dark play about gangsters in the ’50s. But yeah, that’s really the extent of my contact. I haven’t spoken to Emma in a long, long while, but we’re all busy, and it’s been exciting to work with different people.”

In other articles, NPR feature him quite prominently in an article on how he has emerged from Potter's shadow, particularly in theatre and I couldn't agree more. I've always said that despite my admiration for his talents previously, I only really seen his gift when at Equus:

When you see movie actors — people you think of as movie actors, also known as "actors" — live, you get their blood and breath again.