Some new videos and interviews with Daniel Radcliffe have emerged where he discusses the  Cripple of Inishmaan move to Broadway and it's success. Check them out below!

Dan also spoke to USA Today about the play, an interview in which he mentioned his upcoming project Tokyo Vice and even the recently confirmed Brooklyn Bridge. Check it out below:

In images, some curtain call shots have emerged and these are in the gallery here while a few are below. 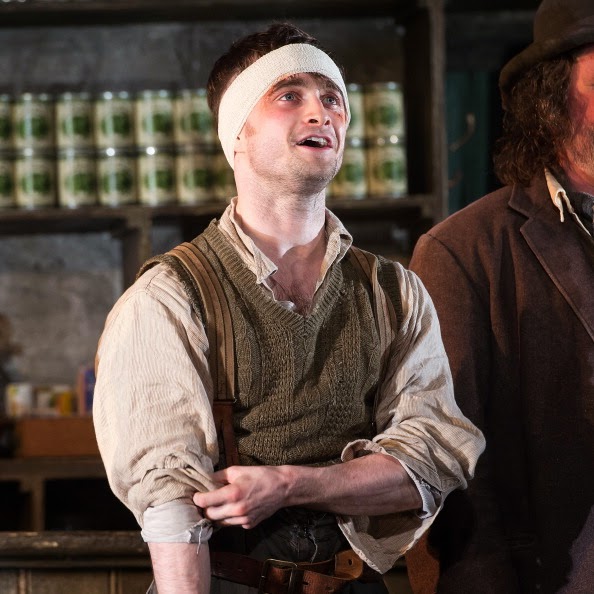 In Interviews, Dan  recently sat down with the Associated Press. Below are some snippits while the full interview can be found by clicking the words "sat down" above!
In the interview she speaks about:

The  lovely welcome Americans give him:

The former "Harry Potter" star is consistently greeted by a burst of applause when makes his entrance on Broadway, no matter if it's a musical or a drama. The first time it happened was in "Equus" in 2008 and he had to stop himself from laughing.
"It's just something we are so unaccustomed to in England," Radcliffe says. "Obviously, it's a sign of being very liked and that's lovely. It's just something I don't think I'll ever get used to.

McDonagh's plays are littered with violence — hands separated from limbs, people tortured upside down — but Radcliffe says "The Cripple of Inishmaan" may knock some people off-guard.
"People who know the more brutal side of him will come to this play and be quite surprised by how moving it actually is," he says. "It's a beautiful play and a sad play and hopefully a play that will get people laughing despite themselves."

Preparing to play a character with a disability:

Though the script doesn't specify what Billy has beyond suffering partial paralysis, the actor decided his character has a form of cerebral palsy called hemiplegia.
"You're on dodgy ground a little bit when you're an able-bodied actor playing a character who lives with a disability. So I want to make it as authentic as I possibly can and by that I didn't just mean learning the physical, superficial mechanics of a disease and mimicking them," Radcliffe says.
"It's so much more than that and I think it would be very offensive to people to think you could just play a disability as if it's like putting on a hat."

How he choses his roles: