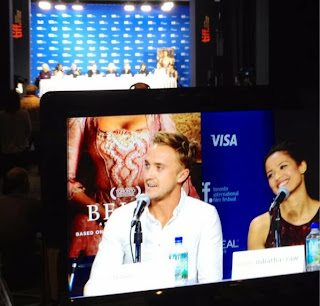 As we reported yesterday (or earlier today if youre in the US), Tom Felton was to appear at a live press conference to promote of of his two period dramas at Toronto, 'Belle'. The video in full is now live on Feltbeats and will be below shortly. An image from the conference is left.
In other Tom news, the former Draco actor sat down with InStyle magazine for a photoshoot and they released an image via their Instagram.
Elsewhere at Toronto, a clip,the first in fact, has been released from Daniel Radcliffe's upcoming supernatural thriller 'Horns'. It appeared on the Collider website a few hours ago and thanks so much to Lucy for the tip!
----------
Sent from my Nokia phone

UPDATED:
Both those videos are now below:


Posted by Admin, Niamh, Danaholics Anonymous at 1:32 AM