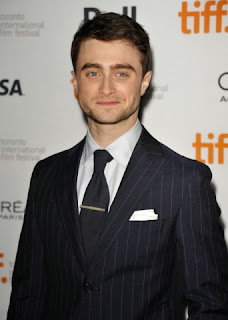 Snitchseeker are reporting that Daniel Radcliffe attended the F Word premiere at Toronto Film Festival last night and some pictures are now in the gallery as well as one left. Dan spoke to USA Today and the Associated Press about challenges and film choices. Some snippits are below:

"You have to make films based on your own instincts ... I have to make the kind of films that I would want to see," Radcliffe [said].

"It's not so much a process or a strategy. It's about what scripts you get sent. So when I read "Horns," I was immediately passionate about it, and I wanted to play this part and knew I could have an interesting take on it," Radcliffe said.

"What my fan base wants me to do is not the most effective way of forging a career, or certainly not the most honest way of doing it. You got to remember that I did 'Equus' and that was a pretty big deal."

"What you got to remember about the Potter audience is that they grew up with me, and a lot of them are now my age or older. They want to see dark, challenging material as much as anyone else does," Radcliffe said.

There is also a video of him chatting about the film among other things:

Also at Toronto Film Festival, Dan attended the Sony Classics dinner (Sony Classics are behind Kill Your Darlings). Although he's wearing the same outfit, two pictures can be seen here and here.

Furthermore, Daniel did some press for Horns and videos are now below: