UPDATED: Fantastic Beast and Where to Find Them to Become Film, J.K. Rowling to Write Screenplay 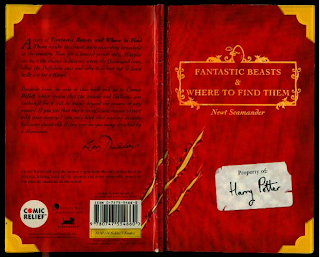 Magical Menagerie are reporting today that rumours about J.K. Rowling writing more Hary Potter aren't entirely wrong - she has signed up to write a screenplay for Fantastic Beasts and Where to Find Them. The original book appeared in the series on the first year shopping list and was later released as a short book in aid of Comic Relief. It is now to be a film about the life of the books fictional author and grandfather-in-law of Luna Lovegood, Newt Scamander. On the piece, which is to be part of a series Rowling has said:

Although it will be set in the worldwide community of witches and wizards where I was so happy for seventeen years, ‘Fantastic Beasts and Where to Find Them’ is neither a prequel nor a sequel to the Harry Potter series, but an extension of the wizarding world. The laws and customs of the hidden magical society will be familiar to anyone who has read the Harry Potter books or seen the films, but Newt’s story will start in New York, seventy years before Harry’s gets underway.

This marks the beginning of a new role for Jo as part of a creative partnership with Warner Bros. We'll post more on this as it arrises.

UPDATED:
The press release for the above news was quite long, and included details of further expansions to this new franchise including video games, a universal theme park expansions. The CEO of Warner Bros has also mentioned that the movie will "look and feel" similar to the Harry Potter films.

“The hope is that we’re going to build a film franchise” that will impact a lot of the studio's businesses, Tsujihara told a room full of Wall Street analysts.

Rowling’s movies will feature Newt Scamander, who is portrayed on the Harry Potter books as the author of Fantastic Beasts and Where to Find Them, a Hogwart’s textbook. The films will be set -- at the outset, at least --70 years prior to Harry Potter.

Tsujihara said Fantastic Beasts won’t only be a film series but also a video game and an attraction within the Wizarding World of Harry Potter at theme parks run by Universal Parks and Resorts.

He wouldn't commit to more than one film, but made it clear that the intent is for it to draw a big audience and warrant sequels and a franchise tag. He called the project "incredibly important."


Former Potter producer David Heyman has spoken to Hypable about the project, showing his enthusiasm but declaring that he will not be involved:

Pressing on, we asked him what his feelings are from the perspective of a fan. “As a fan, as a filmmaker, I am really… really… really excited,” Heyman said to Hypable in what are the first comments from the Harry Potter franchise’s creative team. “She’s a great storyteller, and I’m sure this will be something really great. She wouldn’t do it otherwise – she doesn’t need to do it.”