UPDATED:Will the Doctor Finally Get to be Ginger? Will the Next Doctor Be Rupert Grint? 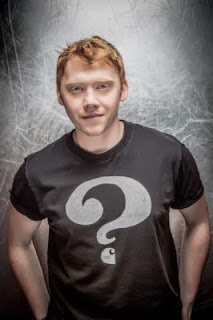 When David Tennant (a brief but awesome Potter alumni) became the Doctor of Doctor Who he proclaimed "RUDE! AND STILL NOT GINGER" and it seems his wish may eventually come true. According to Rupert Grint US,Rupert Grint is one of the bookies favourites to replace Matt Smith when he leaves! And there is even a petition going!As I have been saying for years, Rupert would make a great Doctor...he has the charisma, wit and likeability of the Doctor.
Sign it here if you agree!

UPDATED
But do the general public agree? Radio Times online readers surely don't give Rupert as good odds! Merlin actor Colin Morgan came out on top of the poll conducted by the above website with 23%, suprisingly beating Brit favourite Benedict Cumberbatch who scored
16.19 per cent of the vote. Rupert, only scored an even 9%, but the voters seem very spread so who knows!
Posted by Admin, Niamh, Danaholics Anonymous at 1:14 AM