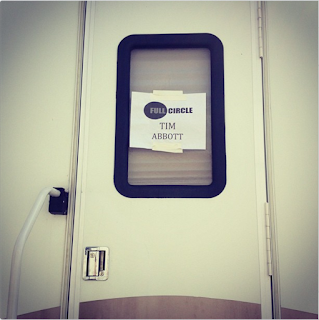 Tom Felton announced two days ago that filming on his tv show Full Circle had completed, so our eyes were peeled for info on actual airing. Feltbeats delivered. They are reporting that the show, to air on Direct TV, will posibly begin airing on October 14th, according to IMDB:


At the moment they list all episodes of Full Circle to be screened on October 14th, but the presumption is that the show will continue over a period of 10 weeks.

They are also currently listing Tom as playing the character of Tim Abbott, and being in two episodes of the show: Episode 1 and Episode 10.

Left is an image of Tom's trailer door confirming the character name.


Tom's co-star Cheyenne Jackson also posted this image of  himself and Tom on last day of shooting.
Posted by Admin, Niamh, Danaholics Anonymous at 8:30 PM