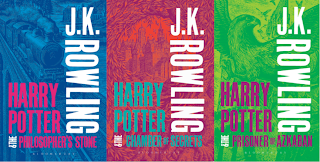 As we previously reported, Kazu Kibuishi illustrated a new version of Chamber of Secrets for US readers for it's anniversary. Now a new image has been released by Scholastic of a new copy of Prisoner of Azkaban also illustrated by Kibuishi for it's 15th Anniversary. The cover can be seen here.
Prisoner of Azkaban, out August 27, can be pre-ordered here.
Source: Snitchseeker

In other cover news, Bloomsbury are to release new adult covers for the Potter books, starting with the first three books in the series, which can be seen above. According to Magical Menagerie:


The new illustrations are woodcut images by renowned artist Andrew Davidson. Andrew studied Graphic Design at the Royal College of Art and has worked with a wide range of clients.