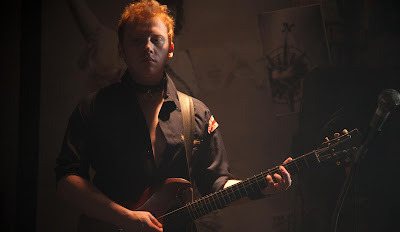 It’s been a turnstile-ridden news environment for Rupert Grint fans this last year so if you are one try not to overdose! The past week the Grint news has gone into overdrive and I’m slightly worried I will have a bit of withdrawl when it returns to next to no news.
CBGB seemed to get filmed without much stir and not much since but now is the time! We have two new photos of Rup as Cheetah Chrome thanks to RG.US. One shows him with the real Cheetah Chrome on set while the other, (top left) is a solo shot.

In other Rupert news, Into the White is to be released on Blu-Ray:


High-Def Digest has announced Into the White will be released by Magnolia Pictures on Blu-Ray on June 4.
The expected features on the disc are to include: Making of Into the White, AXS TV's "A Look at: Into the White and the original trailer for the film.

The wartime drama will also be screened at another festival: 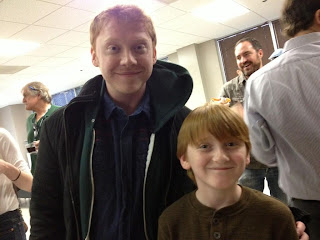 #IntoTheWhite will be screened at Nordic Film Fest Roma on Saturday. Director Petter Næss will introduce the film.

In newer projects, SuperClyde has had a lot of buzz and the pilot has wrapped filming in America. You can read an article from Deadline which mentions it in the CBS section here and Vulture have listed it among the "10 most promising network pilots this year" here. An set pic of Rupert with his young Clyde can be seen right thanks to the young actor Stan Miller.


Io9 also listed it among ones to watch here.

In more Rupert Images he shot a photoshoot as part of the Press Call on behalf of the screenings of The Necessary Death of Charlie Countryman at the Berlinale Film Festival back in February, photos from which can, as with all images mentioned here, be viewed in the Gallery.

FINALLY, Rupert will hit our screens April 18th on ITV1/UTV at 8pm as he will be attending the British Animal Honours 2013 tomorrow night.