Casual Vacancy the TV Show, WB Studio Gets Christmassy and Labyrinth to be Shown in Wee England...

Well that was quick! The news on the web today is that J.K. Rowling's The Casual Vacancy has already been picked up for adaption; by BBC. According to Snitchseeker, a mini-series based on the novel will be aired on the leading UK channel sometime in 2014 and will "be produced by an independent production company operated by Neil Blair, on behalf of The Blair Partnership" alongside Jo, of course. Exciting stuff!

In other tv news, Feltbeats are reporting today that Labyrinth, starring Tom Felton, is to get it's British premiere at the Ciné Lumière in London as part of the Tv Series Festival. The festival will be held between 16 to 20 January 2013 with the first episode of the show being aired on the 20th. It is not known if anyone of importance will attend as of yet. 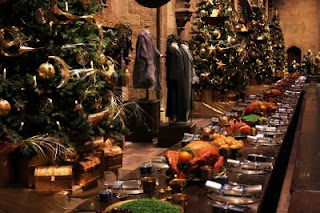 We've heard for sometime that the WB Studio Tour was to get a Christmas makeover, but here is the proof in the pudding! Magical Menagerie are reporting that this has now occurred at the place is, well, MAGICAL. One image of the great hall done up in 8 Christmas trees is now right.
Posted by Admin, Niamh, Danaholics Anonymous at 11:21 PM