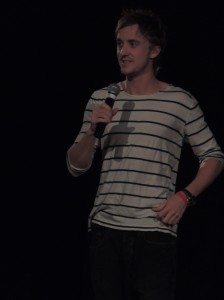 Tom Felton spent the last weekend in Brisbane, Australia to appear at the Supernova convention alongside Potter alumni Chris Rankin(Percy Weasley) and Alfie Enoch(Dean Thomas). Feltbeats as ever have been lovingly covering the event and have reported on all 3 days of his appearances.
Right is just one image from the event. Otherwise you can go to Feltbeats for coverage of DAY 1, DAY 2 and DAY 3.
In other Tom News, Labyrinth is to make Portuguese Television with the first two episodes on 24th November (11pm UTC) and  the last 2 episodes on 1st December (11pm UTC). You can watch “Labyrinth” on the channel TV Series on the Portuguese television. Also You can download the Asos app for images of Tom outside of the ones in this lovely article. A video of Tom and Alfie Enoch can be viewed here.
Some images from the Asos and other shoot material check out our TOM GALLERY. 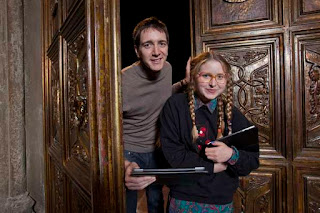 Oliver Phelps and Jessie Cave were on hand to launch Harry Potter Christmas with a bang at the Warner Bros Studio Tour in London recently as part of Sky Movies' holiday promotion of the Harry Potter film series:

"To celebrate all eight of the Harry Potter™ films being available on Sky’s set-top box, on the comprehensive TV On Demand service and Sky Go, the award-winning multiplatform TV service, Sky Movies HD hosted a screening event in the famous surroundings, allowing fans to choose their own film from the series to stream on iPad throughout the evening.

An image of the pair is above while more will be available in the galleries. There is also to be an upcoming NEW documentary with Dan broadcast as part of the event, which we will inform you of more here. 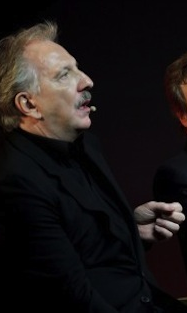 Finally, Alan Rickman participated in a special apple store event to mark the release of his  new movie Gambit. Mugglenet posted a report which included the image right of the star and a  tidbit below:

There is a modest amount of nudity in the film including a completely nude Alan Rickman - who portrayed Professor Snape in the Harry Potter films. He is completely unabashed by nudity saying, "You just have to get on with it, there's no choice, 'OK, right here we go!" How many of you just read that with Snape's voice in your head?

There will be more soon.
Posted by Admin, Niamh, Danaholics Anonymous at 5:31 PM