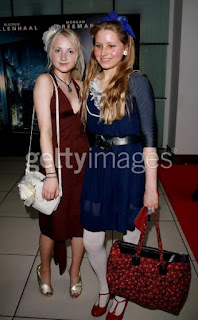 Magical Menagerie are reporting today that Potter Alumna Jessie Cave (Lavander Brown) has sat down with Digital Spy to talk about her future career. In the interview she spoke about Bookworm and Great Expectations:

What’s Bookworm all about?
“The idea is that it’s the launch of this book club that I’ve made and everyone in the audience are members. It’s the big day, it means everything to me. It’s about introducing the idea of Bookworms United to all these people.”
You worked with your sister on Great Expectations – was that something you were a bit hmmm… about?
“Bebe got the part because of me. Bebe comes everywhere with me. All of my sketches… she’s in Bookworm, she’s my sidekick. There’s a joke in my play about I bred her especially to be my bookworm and it’s true! I have three brothers and I said to my mom and dad, ‘You’re having another baby!’ I just prayed and prayed to have a sister and I did. She was the best gift ever.”

Bookworm will be at Underbelly Cowgate at the Edinburgh Fringe from August 4-26. Tickets are available now by clicking here.

MM also posted a new video of Evanna Lynch and Jessie Cave which isn't showing up at the mo, but will look into it.

In other cast news, Daniel's Radcliffe's The Woman in Black is currently topping "The Official Charts Company's Video Chart. Selling 200,000 copies in Blu-Ray and DVD" according to Leaky Cauldron.
In Ireland, the dvd has made the Xtravision Rental and To Buy charts, reaching 4th and 3rd place respectively.
Well Done all!
Posted by Admin, Niamh, Danaholics Anonymous at 10:16 PM