The Woman in Black posted another video of Dan today in which Daniel Radcliffe answers a question about his on-screen dad in Potter, Adrian Rawlins:
Did Dan seek advice from the original Arthur Kipps?


In other Dan news, his A Young Doctor's Notebook co-star John Hamm has been chatting about Dan's part in the film.DanRadcliffe.co.uk reported on the story last week:

"It was my idea[to hire Dan]!" Hamm [said]. "I'm a massive fan of Daniel. He's a wonderful actor and, now getting to know him a little bit, he's a great guy. I knew he wasn't willing to just say, 'OK, I'm Harry Potter and that's the end of that' - he wants to stretch and do different things. I thought he might be open to it - so we asked and he said yes. It's an interesting project. Hopefully I won't embarrass myself..."

Hamm revealed his fandom of sorts in GQ magazine. 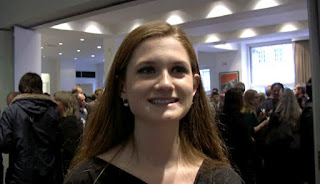 In other cast upcoming projects, Bonnie Wright has spoken to about her acting future. She recently attended a special screening of her short film Separate We Come,Separate We Go at the the London College of Communication in association with BAFTA. Snitchseeker quoted Bonnie speaking about another short she has in the pipeline from an article on the screening:

“With this new film, I want to try something new, to be out of my comfort zone,” she said.