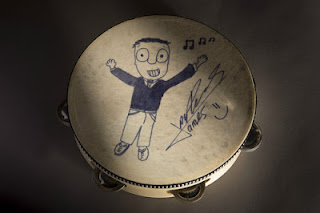 Sound it Out is a charity that provides musical instruments and training for free in Birmingham and the West Midlands in the UK. To raise vital funds,they have now got some tamborines designed (or "tampered with") by Potter stars such as James Phelps, Robbie Coltrane and Emma Thompson on auction on EBAY, which can be viewed by clicking the names and ebay above. Left is James' creation.

In other auction news, Magical Menagerie were reporting that some books signed by Emma Watson and Daniel Radcliffe are on offer, however this has closed since 7pm BST yesterday. The Chamber of Secrets signed by Daniel went for a wonderful £146! Lucky son of a gun got that!

IN PROJECT NEWS,
Steve Kloves has been attached to direct and write Defending Jacob. Leaky, who broke the news, are reporting that this is a new thriller based on a work of William Landry's;

Set in a wealthy Boston suburb, novel follows a district attorney who must leave his day job to defend his son from a murder charge while uncertain of his son's innocence.

In other directing news, according to Snitchseeker, David Yates is NO LONGER ATTACHED to the film Your Voice in My Head, which Emma Watson is also attached to at the moment.
Posted by Admin, Niamh, Danaholics Anonymous at 3:51 PM