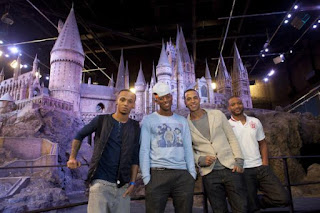 WB Studio Tour announced this evening that "Blue Peter will be live from the Studio Tour today at 5:45pm." They said there would be a special guest.
This turned out to be JLS who performed live from the studios. They posted a pic of the boys (left) and another of the craaazy crowd and Blue Peter here.

Magical Menagerie reported today on some more details for those attending the Studios in the coming weeks and months; as regards the Shuttle Bus that takes vistors to and from Watford Junction. There has previously been very little detail other that the regularity of the bus and how long to be there before your slot. I asked if there was specific protocol for booking etc beforhand but the emplyee I spoke to said just arrive with your ticket ready.
Still love the set-up though, with the train followed by another short journey; kind of like the first visit to Hogwarts! You can see that info right here.

In other Studio news, Katie Leung has confirmed she won't be attending the opening;

"@Kt_Leung: Missing the HP studio tour due to Wild Swans rehearsals. Boo. Though i love my job. Hope everyone else has a blast!"