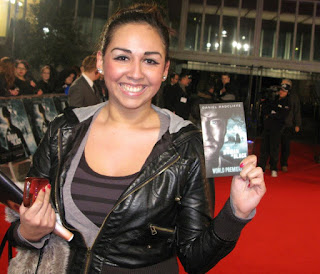 With the film out tomorrow in America, we are continuing our Woman in Black review coverage; here's some links to press reviews,
Mercury,
Fearnet,
Student Life,
Shock Ya.
Dreadcentral.com,
Shock Till you Drop Interview.
New Clip from Moviefone.


but if you want the real deal,from Dan fan to Dan fan, check out Danaholics exclusive review, written by a friend of mine Yasmin who was lucky enough to get to go to the World premiere and see the film! She also writes about her premiere experience, which is interesting and fun! But if you just want the film review, skip to the bold!

The Woman in Black World Premiere -My experience

So I recently turned up to the premiere of The Woman in Black in London's, Royal Festival Hall.
I turned up after work, was told I had already missed Dan Radcliffe and was rather upset, so I was standing there in the crowd, right at the back surrounded by the usual annoying old men autograph hunters lol, more than disappointing!
As I stood there watching Jonathan Ross and Jimmy Carr arriving I thought of calling it a day! Then a lady working on the event walked past me and I saw her holding a couple of tickets in her hand and as she walked past again I instinctively shouted "duuuude is one of those tickets spare? " , she looked at me walked up to me and said " ok , take it but you have to come now" (2 autograph hunters snatched the other 2 tickets) .I was walking down the red carpet freaking out , lol, I was so excited that I actually walked right past Dan Radcliffe who was signing autographs to my right hand side lol!! Then I stood there staring at him until the security people looked at me funny and I decided I should go inside ..

So , the film itself (I am making this one a spoiler free review as I know the film differs to the play and the book)...
The film starts by setting the story with a rather creepy scene which literally had me shivering , then it cuts to the first scene of Dan as Arthur, 22yr old solicitor in mourning, then acting was brilliant, you really see pain and heartbreak in his eyes and wow such beautiful eyes! lol
There's a cute and funny scene with his young son which lightens the tone of the film for about 5 mins before going back to dark and gloomy .

I don't want to give to much away but of course as most of us will know Arthur has the task of going through and organising all the paperwork of a widowed lady who has recently passed, the towns people are all aside from 3 people less than welcoming. Everyone acts rather mysterious and shady, and Arthur takes it all with a pinch of salt, everyone tries to get him to leave but he is certain of the job he has to do before his son joins him for the weekend.

The first journey to the creepy creepy creepy home of the recently passed Mrs Drablow, is done with amazing scenery, and they really could not have made it more "haunted" if they tried! But I don't think it's over done.
The first few sightings of the Woman in Black are a little bit jumpy but they end quickly and your heart rate slows down quickly.

As the next few days go on, each sighting of the spectre , is followed by unfortunate incidents back in the village, the towns people turn against Arthur as they feel it's his fault. But he perseveres and tries to help and prevent the unfortunate events from happening, the more time he spends at the house the more he learns about Mrs Drablow and past occurrences in the village, many more creepy scary jumpy bits happen, which l promise you had me screaming my head off , and I was not the only one! They weren't just little one jump bits , but full on aaaaaaaaaah!!!! Holy craaaaap! Bits lol. Screams rang through the auditorium and many times I was tempted to hide my head in my lap until it was over but I did not want to miss anything ! Lol

The story seems to draw to a slightly predicable ending, and I was a bit like , saw that coming! And then the smug smile on my face and totally guessing the ending was wiped clean off as the real ending came.
And okay okay I've read reviews calling it cheesy, and it was a little bit !... but oh well! It was still heartwarming and left the crowd feeling sad and happy , it takes a good film to make you feel opposites at the same time I think and in my view it was a good ending which tied up the story nicely, although at one point I did expect something different.

All in all Daniel was really good , Looking back on it I think he could have had a bit more dialogue, but he did a very good job with the words he was given.
He was very committed to this role and although I have read other reviews stating that his acting is "wooden" and that he appears "too young" I strongly disagree , and not just because I am a super fan , but because he is a talented actor.I think he was perfect for this film , Arthur Kipps was portrayed beautifully by Daniel and he really did the story justice!

This is a must see film but you have been warned it is scary, it went from a 15 certificate to a 12A but I think it should go back up to 15 personally as it terrified me! Bring on the 10th of February !

Finally, a reminder from Woman in Black UK that you can get tickets for a screening introduced by Dan himself here!
Posted by Admin, Niamh, Danaholics Anonymous at 12:09 AM