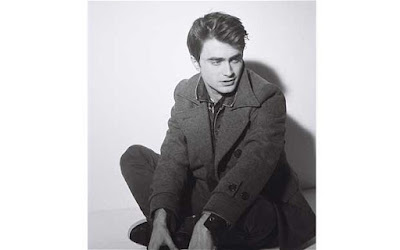 New interviews with James Watkins, Director of the Woman in Black have appeared online. Woman in Black Uk have linked us to this one with Experience Nottinghamshire.

Mugglenet are reporting on one with Female First, which can be read here, and includes praise of Dan himself;

I think he holds the film really well, there is a twenty five minute section in the middle of the film where it is just Dan in the house; there is no dialogue and he has to carry it all with his expressions and how he responds through the house.

That is such a huge challenge as an actor and he doesn't have the other actors to bounce off, which always makes it easier. He is only twenty-three and he has a long career ahead of him - hopefully this is one step on that career."

The picture to the top left comes from a new telegraph interview with Dan, which can be read here.

"The period since Potter has been voracious; he has put away Harry with a vengeance. So is he very strategic? 'Everyone thinks it is very calculated and that we've got a master plan of how the next few years are going to pan out,' he replies. 'Of course we don't. You pick projects for the part, the director, and the script. I just want to do different, interesting stuff."

Finally, Dan is to attend and present at this Sunday's Bafta awards, and will be joined by various other Potter cast members. Leaky, presented this list;