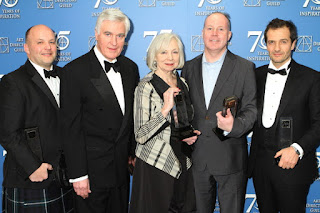 PHEW! thats alot to pack in, but it has to be done!
Snitchseeker have announced that Harry Potter and The Deathly Hallows Part 2 has won at the Art Director's Guild Awards!

Top Left is the Hp team.

In other Potter news, Total Film have released a Top 50 Scenes list,according to Leaky. The list includes Snape's takeover of Lupin's DADA class and can be found here.

In other notable figures, The Woman in Black has achieved a greater opening day figure than first anticipated, Mugglenet have announced.

"According to a report, The Woman in Black was projected to bring in around $11 million in box office gross for the entire weekend. Surprisingly, at the end of Friday, The Woman in Black was in a battle for first place with Chronicle by bringing in over $8 million gross as the two films are running neck-and-neck to take top honors this weekend."

On that note, DR.COM have completed their Toronto WIB premiere report which can be now read here.

Finally, here is a fun clip from Snitchseeker in which Dan gives an interesting possible future career choice;