NEW Woman in Black pictures,videos, and 2 COMPETITIONS including tickets to the World Premiere! 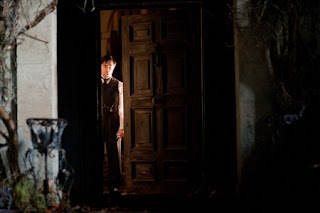 First of the post, we have some new Woman in Black still, exclusively from movieweb.com. One is left, the other is on the FACEBOOK.

Secondly we have an awesome competition for people already intending to Q up for the London premiere! Magical Menagerie broke the news that people attending in Woman in Black dress could win themselves entry to the film! Here are the details;

"To enter, those who come down to the Worldwide Premiere on 24th January 2012 at the Royal Festival Hall dressed as their own interpretation of the Woman in Black will gain access to a special VIP area of the red carpet* The two best dressed fans will also be selected from the crowd and win the prize!

*numbers permitting. The VIP fan pen for those in costume will operate on a first come first serve basis

You could also win an IPOD branded by The Woman in Black by entering the Challenge here at GOODREADS.

Next we have some new clips and stuff.
MTV MOVIE BLOG posted this exclusive Woman in Black clip. It can now be seen below.

While watching please remember to vote for the movie in Mtv Movie Brawl.

Finally, Fearnet had this NEW EXCLUSIVE tv spot, which can now be seen below;