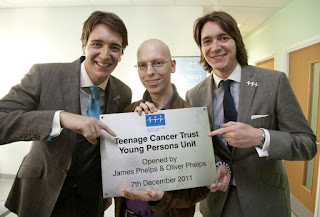 We originally posted this story on the twitter and the facebook thinking that there was only one photo,but as The Teenage Cancer Trust have posted pictures on their twitter and Facebook, we decided to add some of the photos of the Phelps twins with some very brave teenagers who are patients at the Teenage Cancer Unit in Queen Elizabeth Hospital,Birmingham, which James and Oliver opened yesterday.
To the left is just one, the rest are in the general cast album here.
Posted by Admin, Niamh, Danaholics Anonymous at 9:26 PM